Destructive Interference describes the situation where trains exiting a double-bridge or tunnel interfere with each other's progression in a manner destructive to their throughput. It is also referred to as Slow mode or Evil mode 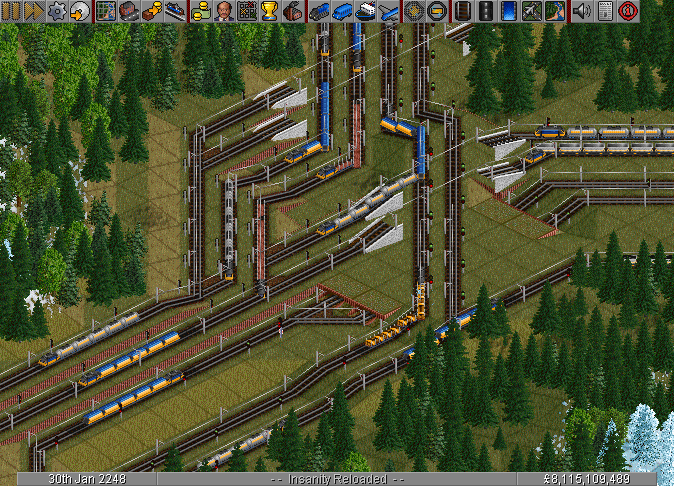 The above picture shows a number of typical double bridges and tunnels. There is nothing wrong with them; they are our standard way of dealing with the inability to place signals on bridges or inside of tunnels.

However, there is an issue whenever we use multiple bridges or tunnels in order to handle the traffic of one line; namely, that they must eventually be merged together. At the merging point, a situation can occur where the two tracks each release a train in turn from a stand still, and these trains then proceed to destructively interfere with each other. This requires, of course, that the track leaving the merge is temporarily blocked.

Once destructive interference starts, the chain of events is quite simple:

As can be seen, as long as traffic is sufficiently high, destructive interference can continue indefinitely.

The following factors, while not causing the occurrence of destructive interference outright, strongly increase its probability and/or longevity

Situations involving only one of these rarely exhibit symptoms; those involving two do only occasionally. Those involving three or more do regularly, particularly under high load.

There is no perfect solution. Those which do exist have side effects. However, this solution is mercifully simple, and in practice works quite well. 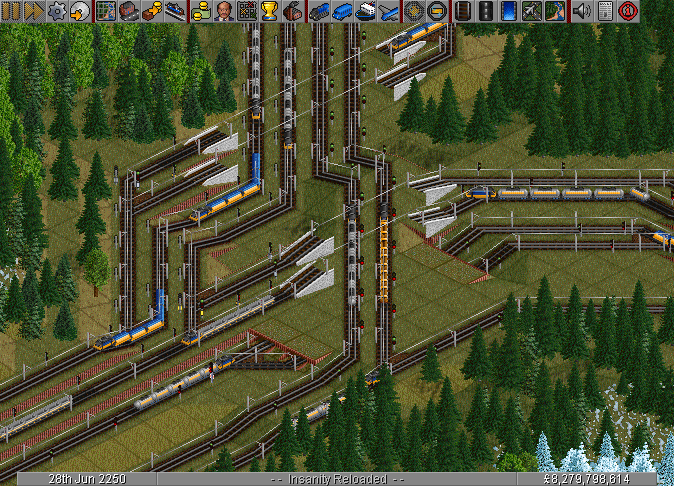 The above picture modifies the central double bridge in order to prevent destructive interference from beginning. What has been done?

The fix works by allowing one of the tracks to empty at full speed, rather than causing both tracks to slow to a crawl.

Not all situations require this fix. In particular, those without contributing factors probably do not. If you are not sure it is broken, don't fix it. This is doubly good advice as, if destructive interference becomes a problem, the fix is rather trivial to apply