Creating a map may seem like both easy or difficult, depending upon how you look at it. If done with a bit of care, it's not difficult to create a map which can be played on a multiplayer server without trouble and without requiring further changes. The key to this is to prepare afitting list of newgrfs and to choose the right advanced settings BEFORE you actually start to create the map. The latter can then be done by a simple "random map" (for public server and prozone games) OR creating a map with islands (for the welcome server).

Before you actually start creating a map, you have to choose from the main OpenTTD screen the newgrfs you want the new game to use. Subsequent modification may work, but it may also introduce all kinds of bugs which can render a game unplayable. General rule: per grf type choose only ONE single grf. When choosing grfs, mind that some grfs require a certain climate – especially important for industry and train set grfs.

Use only one newgrf per vehicle type. Especially obey this rule concerning train sets.

The GRFs that are currently supported by our server are those in the #openttdcoop newgrf pack and those found on bananas. You should have them already, if you play on our server regularily. If you use newgrfs from bananas make sure to update and use the lastest version of them.

Now, check the grf list in a game whether there are any incompatibilities or requirements like one grf has to go before another – fix those. At this stage you also might want to set grf parameters for some grf. Most road, town and vehicle sets take grf parameter to modify their behaviour. Have a look at the supplied readme files for details. E.g. the 2cc train set allows to control the pricing and running costs as well as the choice of available trains via grf parameters.

Use the grf presets to save your selection of grfs for future reference – it’s a nice selection which you may want to refer to later :) . Don’t forget to apply the changes you made. 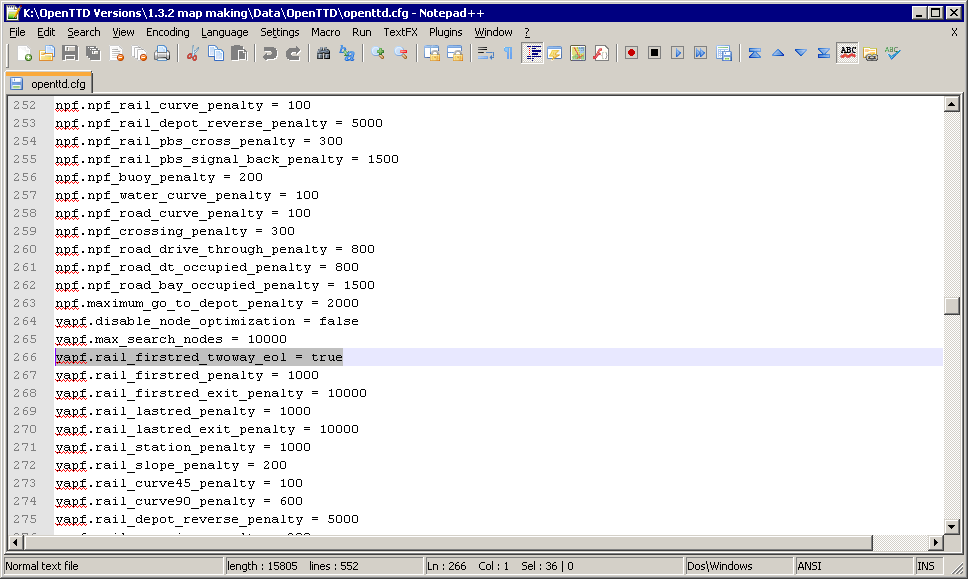 You need turn on the end of line feature for 2way signals, which is off by default.

You want to allow building on slopes and also all kind of bridges. Don’t reduce the distance where refineries can be built too much, keep it at 32

Here are some really important settings:

Also here all settings should be exactly as shown. Especially mind the station spread and that the towns allow us to build on their ground our road stops.

Again, save those settings and then, finally, we can go to actually creating the game:

This may be helpfull

For the hurried person

Setting up a Goal Server?

You may also certainly look around in the scenario section of the forums or the scenario wiki and shop around for a good map which might be modified a bit to suit your – and our – needs. Mind also, that we like to play our games without any of the options in the cheat menu activated – with the possible exception that money might be cheated for certain scenario purposes.

All rules on how to make a good game are, of course, only rules in so far, as they serve well in 98% of the cases. There is always the odd occasion where one well-established game creation rule is rather not suitable. But if you bend those, be really sure that you know what you do :) – they need a sound explanation.

If you open a map, edit it and save for future usage make sure that you save it in a zoomed-in state. The same view as was last used to view the game while modifying it will be used for any person who subsequently joins it on our server. A zoomed out state is not desirable as it will make joining for slower computers way more difficult, if not impossible.

If you have finished building a scenario, you can upload it to the ready-to-start maps collection page with a suitable description (an example entry exists). You can ask a member at the #openttdcoop channel on irc to review your map and if it is ok, chances are good that we add it to the server for inclusion in the next game. You can also ask us for some feedback on irc when you are unsure about some of the above points!