Road stations typically take a back seat to rail stations in #openttdcoop games. Railways have much higher capacities than roadways and trains move much faster than trucks and buses. However, road stations (especially when properly used) can be used to improve parts of a network where a train would be overkill.

Firstly, since the RoRo road stations were introduced it is much better to use these than terminus stations. A terminus road station is as inefficient as a standard terminus rail station. 1 vehicle may enter and leave at a time which greatly reduces efficiency as with the RoRo one 2 may enter and leave at once, that 4 vehicles in play an efficiency boost of 400% if used constantly.

Routes can be created with the addition of one way roads in a recent nightly, see OpenTTD Wiki: One way roads for more details. Routing is essential if you want an efficient station. At the moment the best stations I can create for busy road stations is 150-200% as you have to force lorries in and out in 1 direction. If 1-way RoRo stations could be created where road vehicles used both sides of the road in one direction this would boost it up to 300-400%.

So the two key points are:

To create a good station you need to have enough bays now this is individual to each instance of a road station and must be played about with accordingly.

My station concept requires minimal station walking but not in the traditional sense it requires a 1 tile space between each station and its neighbors. 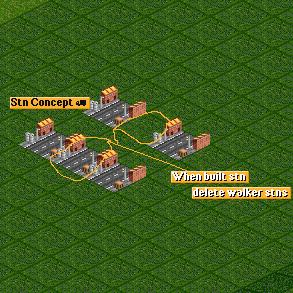 Gaps must be placed between station tiles

When stations are completed delete walkers. Then place roads to link stations and link roads through the gaps you created For this next image I expanded my station slightly 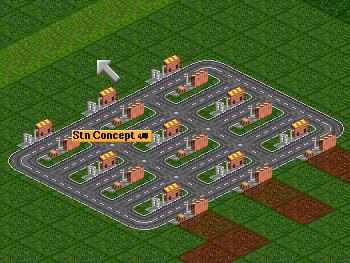 This as you may have noticed doesnt have routing and so I will build in routing West to East. 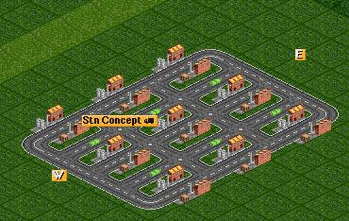 Note: Please use distant-join Stations, How press CTRL while Building. In trunk since r14121.

Where to put them in and pull them out! This decision is one of the most important as it determines whether traffic piles up or flows smoothly

I so far have found that Big stations require a different pattern to little ones. For big stations it is good practice to put vehicles in at one corner on one side and pull them from the opposite corner like so. 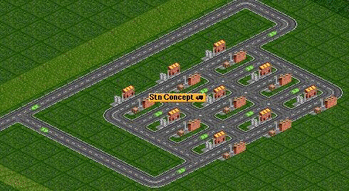 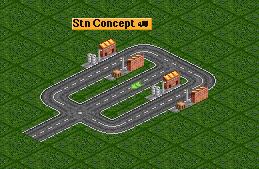 In most cases where 3-9 lorries are using this station the one way road piece can just be normal road.

If the Exits/Entrances don't work well, try placing them centrally on the station sides

Firstly a big pickup at a forest. Some may argue it doesn't need to be this big and I would agree but as I built it with the aim to accommodate the level of trucks in service it's just right and looks alright. It also has a second entrance coupling this was to more evenly distribute lorries as they seemed to pile up on the first row of stations 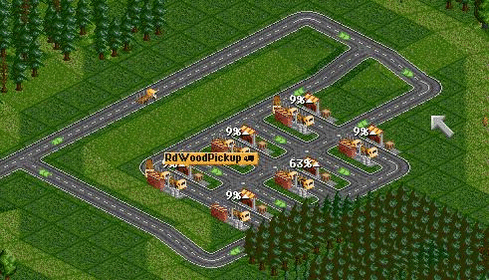 And this is the resulting drop, unusually it has a small forest attached which has another station with lorries running between the two and it is smaller than the pickup but copes well with a good flow rate. 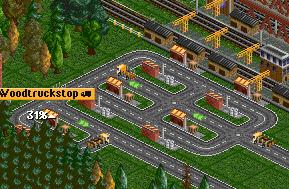 The drop for wood

Of course I only have my experience so far and will be investigating these items further to further increase the quality of this guide but I hope you have found it useful. feel free to improve this guide with your own thoughts