This section belongs to Mainline related tips and tricks.

The purpose is clear; Mainlines are designed for high throughput! Less-frequent signaling increases the spacing between trains, wasting capacity on the lines.

In order to keep the signal blocks at 2 tiles (as mentioned in 1.1) you should try to avoid tunneling the Mainline by default. Bridge the Sideline instead! 2-tile-signaling on a mainline is useless if there is one single point with a 6-tile signal gap. Trains will queue up right before the 6-tile gap, and the capacity of the mainline is determined by its most congested part.

Sometimes, its necessary not to let a town cross your tracks - one reason may be that you need some space later on. Basically, there are two possibilities: buy up land or build a construction as shown on the screenshot. The last option is more elegant and doesn't add ugly signs to the landscape. If towns are not allowed to build roads (the default setting in our coop games), this does not matter. 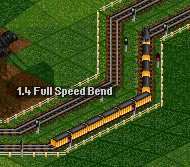 Remember: S-bends are full-speed! It's perfectly acceptable to make bends on the Mainline, as long as there are no slowdowns. Some small bends ease up construction and may save costs. More info on bends and speed limits here

A so called stepped climbing means that you try to avoid a two-tile-uphill. Its not only something which slows trains down; its also ugly and non-realistic. If you construct uphills in a stepped way it looks far more like a Mainline.

Mainline is should be the fastest collection of tracks on the map. Therefore, you will want trains from a sideline wait a bit for a gap to enter mainline. This is accomplished using technique called priorities. 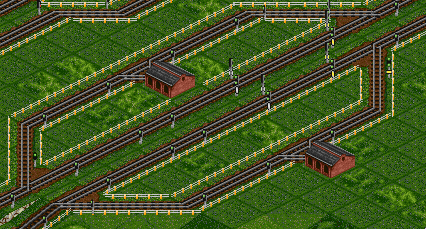 Sometimes trains need to go servicing, replacing and just need to be removed or created. This is accomplished at the service centers. Bare in mind, that these depots are situated only at mainlines. If they are at a sideline, or even worse – at the station, trains will easily jam.

And last but not least, can you notice the priorities?