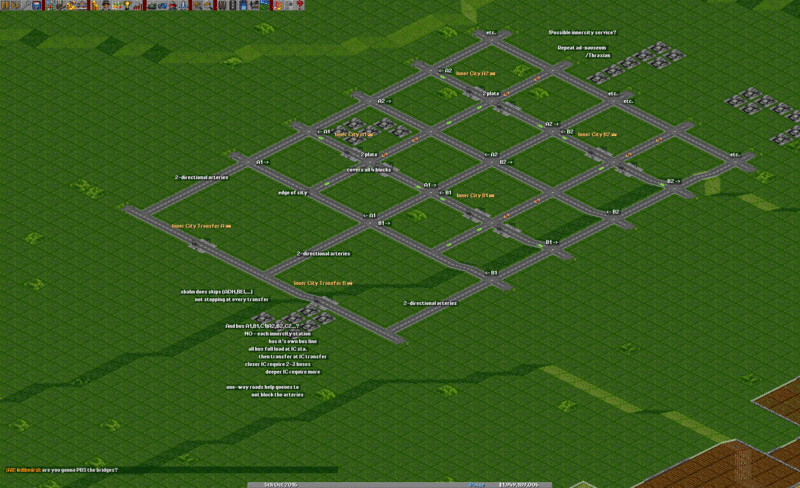 The goal is to provide an efficient way to provide passenger service to an entire city without major station walking. One major problem to address is that RV queues can block through traffic on roads.

The use of one-way streets allows for queues to form without blocking traffic. Each station has two blocks (6 tiles) of queue space, which should sufficiently handle any queue that forms for that station. If the queue becomes too long, then there are likely too many buses servicing that station.

A bus stop placed in an intersection will cover the 4 3x3 city blocks adjacent to that intersection. Since stations cannot be placed on an intersection, we place bus stops on two opposite sides (using a 3rd station temporarily to walk across the intersection). One such station is created at every other intersection to ensure total coverage of the city.

Every other line into the city is considered a major artery. These arteries should never block and provide buses access to and from their respective stations. Upon reaching the intersection prior to the cross-street that contains their stop, the bus will turn off, and then make another turn to approach their station's intersection. Buses can go either direction at the intersection to reach a station platform. The bus will leave the station to immediately join a major artery, which will take them to the transfer station for the local ICE/SBahn terminal.

Each station has a separate list of buses which will perform a full-load pickup, and then do a transfer no-load drop at the ICE/SBahn terminal. Separate buses ensure that each station can be serviced independently and no station will backup due to insufficient cargo at another station causing buses to backup (due to full-load orders).

In larger cities, it may be best to create several SBahn stations for bus transfers, and have them all connect to an ICE terminal located outside of town. Building these SBahn stations can be done to enhance the coverage and symmetry of the network.

Lots of RVs are required for large cities. Limiting the number of cities with this type of infrastructure will help with the server load caused by so many vehicles.

Some stations may create more passengers than two bus stops can keep up with. In these cases, the station can be expanded into 2+2 stations by simply adding another loading area adjacent to the existing one.

Monitoring of each station will be required to ensure that they are all being serviced adequately. Using a common naming convention for each station (based on coordinates relative to the city center) may facilitate this monitoring.

Generally flat land is required to create such a network, as the road depots cannot be built on slopes. Expanding the station (as mentioned above) should be considered when terraforming the city to meet this requirement.