This section belongs to Sideline related tips and tricks. 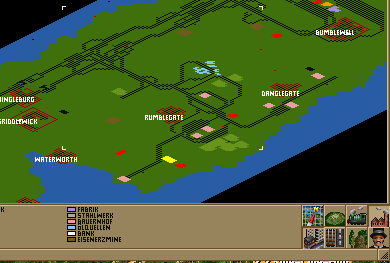 Try to minimize the number of Sidelines by placing them properly on the map. The industry-view mode of your map helps you spotting the right places for building Sideline Hubs. If you have the opinion that one industry is far off an existing sideline, start a new one! If you plan properly, however, you can somehow minimize the number of Sidelines needed, therefore minimizing the construction work in a game.

At this sign you see a rather common implementation of a Sideline Hub. Notice that no Hub looks like an other due to different terrains and/or different track layouts. 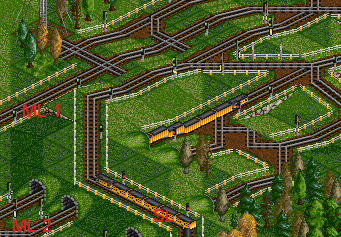 An Exit Loadbalancer is needed whenever a trackpart leads into a Mainline. It is assumed that a Mainline is a well-used part of your network with at least two tracks in one direction. Due to the common pathfinder in OTTD, a train - roughly spoken - chooses the shortest path to its destination. Therefore, a second rail into the same direction could easily become obsolete if trains only choose the closer one. They even try to access the closer rail if this rail is already occupied by another train moving on the Mainline. It is obvious that we need some kind of solution to this problem.

The first thing you should be able to deal with are Presignals. Look at the dedicated Guides if you are yet not aware of their functionality. A dedicated Guide about Loadbalancers in general can be found here. The good thing and main reason for the Tutorial you're reading is that you are able to see an Exit Loadbalancer in action!

If you look at the picture to the left you see the Mainline going from the west to the east, having two tracks (ML 1 and ML 2). One Sideline Track (SL) offers access to both mainline tracks. The signaling is constructed in order to let the train on the Sideline "look ahead" and choose - if available - a free track. Now there are two advantages: on the one hand the Mainline is used more efficiently; gaps on the tracks may be filled with trains approaching via the Sideline. On the other hand, the Sideline trains are more likely to maintain full speed due this "look ahead" feature of the Loadbalancer. Note that the construction secures trains moving on the Mainline the full speed in any situation.