Terraforming is a difficult thing in #openttdcoop games. Sometimes we try to build our networks as realistic as possible while making minimalistic changes to the landscape, instead using the existing geography of the mountains and valleys. In other games we flatten everything due to the most effective network construction like massive stations with big and fast entrances. Both ways of playing are in their own way interesting and therefore you should all styles of terraforming defined in this article.

Before a game starts a !network plan will be created; things like train length, network layout, and the kind of game will be discussed and finally planned. One part of this discussion is the style of 'terraforming' that will be used and is given with all other information about the plan.

We had a try on the late Public Server Game 59 where we tried to have No-Terraforming. And other than some few tricky problems by stationand Hub building that forced people to think outsite the box it all in all went rather painless (NO TERRAFORMING not working yet) 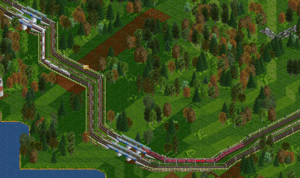 This terraforming style is often misunderstood and people mistake it for No-Terraforming. This style is the effective reversal to Coop-Terraforming. The network layout will be created according to the given landscape. You should use the existing mountains and valleys and create eye-candy tracks. The use of tunnels is quite important, because in reality trains often use tunnels instead of going over a mountain. The aesthetics of the network is more important than the capacity and speed of the network.

By far the most easy rule that is around. Also known as "free terraforming" and it allows you to terraform to your needs or pleasure. So you are free to flatten that mountain in order to build your station or network.