This guide is a signalling and basic rail networking guide for absolute OTTD beginners. It assumes you can build a railway line such as the one in the picture below. If not, there's a guide on the openttd wiki. 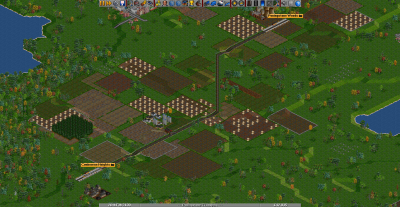 The limitations of the track in the picture above are obvious: as only one train can use it, you will need to build a new track for every single train. Of course this is very ineffecient, takes a lot of space and will cost you a lot of money. With some basic signalling knowledge, the capacity of this track can be increased tenfold just by adding a single track, which will be the goal of this guide. First, let's go through the different types of signals. The picture below shows all the different types of signals in OTTD.

Most of these signals are used in advanced networks only. In fact, you can build a smooth-running effecient network using just one of them: The one-way block signal. The PBS signal will come in a short while later. Let's forget about all others for now.

One-way block signals work as follows: trains can only drive past them if they hit the signal from the front, if they hit the back, trains will turn around and try to find another path. A block is the track between two signals. If this block is taken, the signals on it will be red, preventing another train from entering it. It will then wait at the red signal for the block to clear.

In the pic below is shown a so-called LR track. This means it has one Left track and one Right tracks. Tracks like these are the core and basis of any rail network. You should try to always have your trains drive on the same side of LR tracks. This makes it easier to expand, as you never have to cross tracks. On #openttdcoop we always drive on right. It's recommended you do the same.

To quickly signal these tracks, use auto-signalling. This is done by placing the first signal and then holding the ctrl key while dragging a short distance. The game will automatically signal the track untill it hits a junction. Note that signal distance is set to 2. This is the highest capacity signal distance. There is no reason to use a spacing of 1, as any network will have junctions where there will be a gap in the signalling, effectively reducing the capacity to a signal spacing of 2. As signals are cheap, you should make it a habit to always use a signal spacing of 2, right from when you start building.

Use one-way block signals and auto-signalling to quickly place signals on both tracks. Place the signals on the outside of both tracks, this will make our line a drive-on-right one.

Having one platform means only one train can load at a time. This will be fine for now, as we are only serving one coal mine.

Meanwhile, production at our coal mine increased. With our new high-capacity track, adding two trains is no problem at all. When production increases again, it might become neccesary to have multiple trains loading at the same time. Let's add a platform at our coal mine. Simply build one paralel to the platform that's already there.

We can simply split the original incoming track, and merge again later. Again, we're still only using one-way block signals. As you can see in the pic below, we can now have two trains loading at the same time. Having just two platforms to serve a single coal mine will be enough for a long time. Don't worry about adding more for now.

Problems may arise when both platforms are taken and a thrid trains wants to enter the station. If the third train ques behind the train that that entered the station last, it might still be stuck there even if the other platform is empty, as shown in the pic below:

Of course, we would like the train to be loading at the empty platform rather than sitting idly. This is where the one-way PBS signal comes in. PBS stands for path-based signal. Unlike the block signal, it doesn't look just for an empty block but for an empty path. This means several trains can be on a single PBS block. A PBS signal will only stop a train when it can't see an empty path to where the train wants to go. In our station, we can use this signal to make trains stop at the split in the incoming track if both platforms are full. It will then wait at the split untill a platforms becomes available for it to load. To do this, remove the block signals in front of the platform, and place a single one-way PBS signal before the split, as shown below.

As you can see, the train now waits at the PBS signal rather than queing at the platform. It will enter the station when a platform becomes available. Note that we continue to use block signals after the station.

You will probably see players using only PBS signals and no block signals, there is however no reason to do so. It's a good habit to stick to using block signals and using PBS only where neccesary. The advantages of this habit become obvious when you get better at building and start using pre-signals.

Let's start by making another LR track running from the new coal mine to our existing mainline.

Let's make a two-platform station identical to the one at our first coal mine.

It's a good idea to make a so-called injection depot at every primary pickup station, this will make it easy to add trains later, when the production at the industry increases.

Now, let's hook up our new coal mine to our existing network. The easiest way to make a junction is shows in the picture below:

Howevery, capacity of this type of junction is very low. As the whole junction is seen as a single block by the block signals, only one train may be on it at any one time, even it the paths of the trains were never going to interesect. As you can see in the picture, one train has to wait for the other to clear the junction. Capacity can be increased by using one-way PBS signals at the entry of the junction, as seen below.

As you can see, we can now have trains going either way on the same junction, as long as their paths don't intersect. There are still, however, issues with this junction: a train returning from the power plant to our new coal mine, will still have to wait for a train going the other way: their paths intersect, even though they're not using the same track.

The solution to this is to make the junction grade-seperated. This means we need to add a bridge or tunnel to avoid any possible intersecting paths. The tunnel in the picture below provides an overpass for trains going to our new coal mine. As there are no intersecting paths in a single block anymore, there is no need to use PBS signals. Regular block signals will do fine on this junction.

With the added trains from our new coal mine, the drop station at the power plant is now becoming quite busy with just one unloading platform. As we're planning to keep expanding our network by adding more coal mines, let's expand our power station drop to 4 platforms. This can be done in exactly the same style as the pickup stations. 4 platforms will be too much for now, but as every train will be unloading here, we will need all of them when we add more mines.

Now that you know the basics of networking, it's not hard to connect more coal mines to our existing network.

If you keep adding trains, something in your network will eventually fail, but this simple setup will be able to handle quite a few trains and you can make big networks using these basic techniques. There are countless ways to make more effecient stations, better junctions and higher capacity mainlines, but these are all beyong the scope of this guide, for now, practise building using these basics, and enjoy.