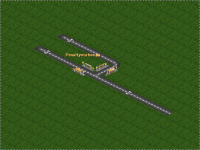 A basic split. Even though it is a bus station, it will work for all vehicles.

A major issue for all networks in openttdcoop is balancing. A new line only works well if it receives traffic from the other lines so that the overall traffic is balanced. Because roads do not have signals, the possibilities of road vehicle networks are very limited. The only way to split traffic is by using the pathfinders penalties. The only way to penalty them is by dummy stations. An empty stations is a minor penalty, but a station already containing a vehicle is a huge penalty. This makes it possible to split traffic: one vehicle drives through one of the stations and causes a penalty to a bus behind it, which causes it to choose the other station.

One problem of this technique is that it is only possible to split lines with a constant stream of road vehicles. Sideline balancing has the problem that it's not possible to build any priorities, so it's needed to balance sidelines by connecting them only to some of the mainlines. 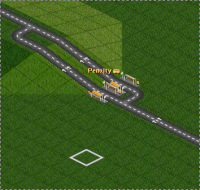 A doubled slope that doesn't slow down the main line behind.

A doubled S-curve to minimize slowdown.

All of the following is about the realistic acceleration model. With the original model, trucks tends to be much slower and building is more difficult.

First, all curves slow down buses to around 75 percent of their maximum speed. This is different from trains, so curves should be avoided as much as possible. It is possible to double curves, but it often takes a lot of space.

The second issue is about slopes. Slow downs at slopes are related to the slope option in the advanced settings and the power of the vehicles. With powerful vehicles, slopes may be no problem at all, if they become a problem it is possible to double them as shown.

One good thing about road vehicle stations is that they can be used from both sides and ro-ro by default. Don't use the terminus stations because they can only be entered from one side and the vehicles take a long time to park and exit. To keep the platform count low it is recommended to build a station design where road vehicles can enter from both sides. Another advantage of this design is that vehicles don't interfere each other as shown in the FPP Drop Example of PSG 226.