A self-regulating SBahn (hereafter referred to as an SRS) is a network that requires virtually no maintenance to ensure all of the connected stations are serviced in a very efficient manner.

Like any other SBahn, trains will be picking up cargo from a number of stations, and then transferring that cargo at an ICE (Inter-City Express) station, where the cargo is loaded onto another train for delivery to a remote location. For more information about that concept, review the ICE_SBahn article.

The self-regulating aspect is provided through use of each train's order list, and how the tracks are laid out. 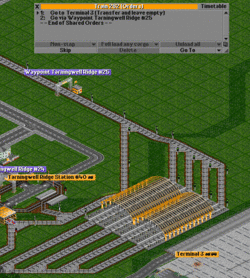 In an SRS, all of the stations are serviced by a single group of trains. Each train has a single order to visit the ICE station. Once they leave the ICE station, the only way back is through one of the numerous stations on the SBahn loop (the only exception being the use of the overflow line, detailed later). At these stations, the trains will load any available cargo before travelling back to the ICE station.

Depending on the catchment and amount of cargo generated at each station, there may be one or more platforms available, each with a waiting queue for zero or more trains. If a train reaches an exit on the SBahn loop where a platform and/or waiting queue space is available, it will take that exit, as the train will always look for the shortest unobstructed route to the next destination on its order list (in this case, the ICE station). If there are no platforms or waiting queue spaces available, the train will continue along the loop to the next exit.

If these trains contained specific stations in their order list, a player would be required to periodically inspect each station to ensure that they are all receiving enough attention. The lack of orders will ensure that each station receives trains regularly, provided enough trains are servicing the loop. To determine if there are enough trains, simply look at the cargo ratings for the last station on the loop. Good ratings indicate it is also being regluarly serviced. Poor ratings indicate that the trains are not reaching the station, which generally means there are not enough trains to handle the previous stations. In this case, more trains are needed (see the section on Injection below)

If a train passes the final exit on an SBahn loop, and has been unable to find a platform or waiting queue space, the train is considered to be on the overflow track. If trains enter the overflow track, it simply means that the network has more trains than are needed to service the network. In this case, the train can be sent back to the beginning of the loop (bypassing the ICE station), or it can be temporarily put into a holding pattern using a waiting area or depot. 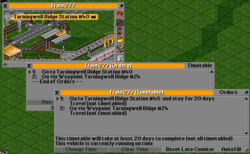 Injection is the process by which new trains are added to the network.

These trains can be injected automatically, or this injection can be done gradually through use of a timer. The timer is simply a single engine running on a separate loop. The timer train has timetable orders to sit at a station for a predetermined length of time. This station is in the same signal block as the overflow track, so while the timer train sits at the station, it blocks overflow trains from re-entering the SBahn loop. Once the timer train leaves the station, the signal block is cleared, allowing an overflow train to re-enter the SBahn loop. Due to the blocking nature of this timer, it is best to construct a depot to contain trains that are waiting to get back onto the SBahn loop. Otherwise, too many trains could cause a backup that blocks the later stations on the SBahn loop, and could potentially lead to deadlock in extreme cases.

The injection process is the only aspect of the SRS that requires periodic review. If no trains enter the overflow track, then the cargo generated on the SBahn loop may exceeed the capacity of the trains handling the loop. For this reason, it is best to have at least one or two trains available in the overflow track for injection into the network. Worst case, these trains immediately overflow and return back to the overflow track. 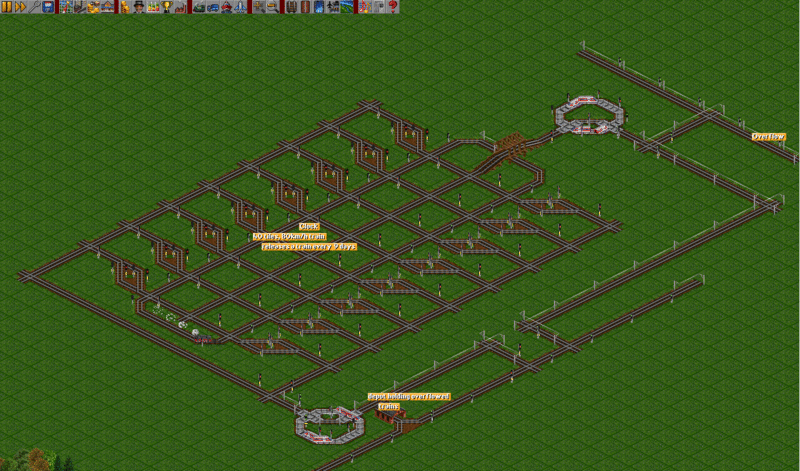 Showing a different injection-system possibiltity, this one actually looks at whether the network has enough trains or needs more. The idea behind it is to add a train if no train overflowed for 9 days. This system is used in the Selfregulating Network in PZG02

Stations on the SBahn loop

Because the trains on the SBahn loop have a single order (to transfer at the ICE station), they will not wait at an SBahn loop station for a full load. To ensure these trains are loaded to capacity, it is required to have some sort of controlling mechanism at each of the SBahn loop stations to ensure that when a train arrives at the station, a full load of cargo is available. Once any available cargo has been loaded onto the train, it will immediately leave the station, not waiting for any more.

By design, and SBahn is a loop. However, with some creativity, the design of this loop can vary greatly. Here are some additional examples of self-regulating SBahn networks: 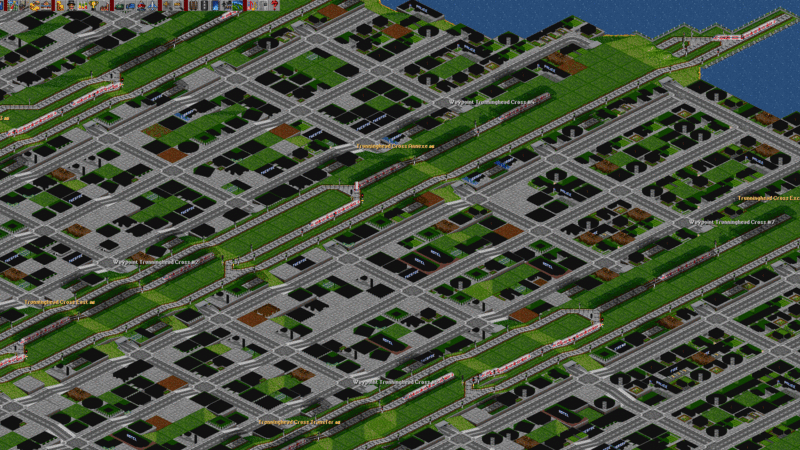 SRS Linear Design - note how the terminus stations reduce the station size, and the overflow track tunnels under the stations to allow for more city buildings.