I believe it'll work best with trains of various speeds, also a version with 2 entrances to presignal block would be even more efficient. ewanm89

Looks good, I agree with Ewanm89 it would work better with 2 entry streams but I think that may be difficult. Great work and an informative wiki article *thumbs up*. Sedontane

I think I'm seeing a possible problem. Assume all the platforms are full with the exception of one near the far end. A train enters the presignal block because there are no trains in it and one of the exits is free. It proceeds toward the free platform. Before it reaches the free platform, another train also enters the presignal block because the same platform is free, and the bypass allows the signal block to pass around the train that will take up that platform. The second train was admitted to the presignal block, even though there are no platforms for it to use. This could block other trains if nearer platforms open up before the intended one. strstrep 04:36, 7 September 2007 (UTC)

If this type of station were put as a terminus on an SL, would it work if all the entrances were on one side, the exits on the other, and an entrance/combo signal placed to allow trains to decide whether to choose the even or odd track numbers? One set of tracks (even/odd) would be at the higher elevation, while the other set would use the tunnel system as originally designed with the presignal bypass structure of the other. The exit tracks would remain as they are, minus the presignal bypass, and would eventually become the SL. Thraxian 13:27, 6 September 2007 (UTC)

Here are some screenshots. I have not added any signalling yet. The first image is the base case. 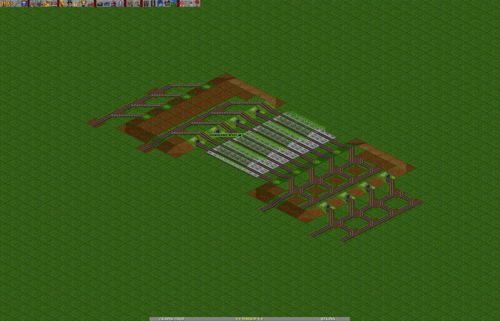 The second shows a possible expansion technique to increase number of inputs and outputs with minimal change to the station width (1 added width for the extra output track) Further expansion can be performed by adding additional bridges in the same fashion, and adding additional exit tracks as needed. 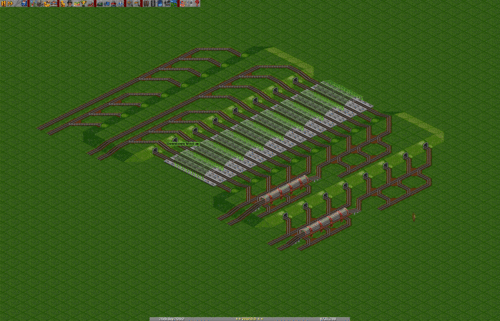 I'd welcome any feedback about this modification of the PBS design. Thraxian 14:52, 6 September 2007 (UTC)

As already pointed out by strstrep there is a slight jamming issue with this and I've tested it out... The jam does happen exactly like strstrep says...

I've put toghether a simple bugreport @ http://mdnet.se/temp/ottdcoop/ containing described screenshots and the lab-savegame if anyone wants to try it themselves...